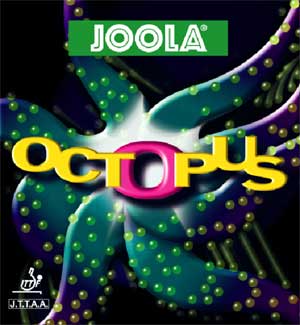 It is with astounding surprise that we have been informed that our Crossbow cover has been removed from the list of authorized covers as of the 1st of April 2008.

We contacted ITTF to appeal against this decision as to our understanding, the Crossbow abide fully to the rules and norms defined in the technical leaflet T4 from ITTF.

One has to agree that for the moment, only ITTF has the authority to decide if the Crossbow can be reenlisted and we have no indication as to when such a decision will be taken.

To thank you for your trust in our product and to help you not to be disadvantaged in your preparation for the coming championship, we have decided, as a gesture of goodwill, to send free of charge to the customer who bought a Crossbow cover

Arrived E', the new tt master that it will be accredited for 2008, calls tt Master Swing Back IF, (the F is for Friction). While I write these lines I have the rubber my eyes (me has arrived prprio this afternoon) and ve I describe it. The dot is much similar to that one of the Swing back I, small one but gia from new the much softest one. As soon as I have exited it from its endured famous guard that the rubber is rolled up on if same like when is passed of the glue on one puntinata ox, the thing has made curious a lot to me and famous that sure to the base the rubber has been dealt. My first curiosity has been that one to pass to us over a little ball, and effectively light grip it holds it at par of one 755 of 729 or one kokutaku 911. Other curiosity is that one glue it on the first chassis that understood (Sunflex light premium all + in balsa) and makes us of palleggi with one the little ball. Premised that the chassis is rather rigid and enough fast with great famous astonishment the little bounces that the little ball makes on the rubber, sign that the rubber is indeed slow even if to eye (of is not sure) would have to turn out a faster pizzico of swing back Adesso does not remain me that to try it in arena tomorrow and still better, to make to try it to who is more Bravo than me with the long dots in arena, obviously tomorrow I will make a detailed report you I glue the rubber on a LKT Toxic 5, chassis 5 layers speed from all round with propensione to the defense over size. hardly tries it notices endured that the rubber is sure slower than any rubber not vetrificata but leggermente faster than swing back easy Sembra rather its I use but I notice endured that the return on the top opposing is not that one of vetrificata, other thing that famous is that it is succeeded to push well and also strongly on smooth or cut ball with remarkable effect zig zag. Date in hand to good a third category that plays with swin back I, confirmation my feelings. This time is I from the other side to endure of the effect. Blockando as with vetrificata SBI the ball little arrives with long cut and often altina, we were a po disappointed. To this point the friend tester decides to half make step behind and beginning to blockare mine top being lowered the raquet towards the bottom at the moment of the impact: result, block tagliatissimi and lowest indeed heavy. To this returned point the smile to ours tester, decides from the same position to defend in chop on mine topspin, boys indeed terrible creed not to have never seen null more cut. After other tests to the table we have noticed large-capacity to push on the smooth balls that before with rubbers vetrificate were indeed impossible. In conclusion, as the game to wall was expectable once will not be more an effective game, it is necessary to play in more active way. However the disturbance is indeed high, taking the hand to us they are sure that it can give also more disturbance of the classic ones vetrificate, the varibili of effettuabili blows with this rubber are by far advanced to those possibles with the vetrificate ones, and the wrist job will give those additional disturbance that will make to drive crazy is those that they already did not know to us to play with vetrificate but also for that they knew to us to play, therefore also I me I will have some to worry the rubber has not been still accredited and therefore you do not hurry to buy it. It will come accredited to November.
Внимание! У вас нет прав для просмотра скрытого текста.