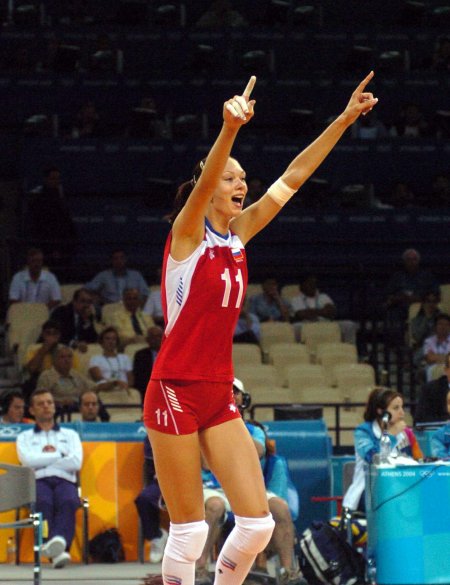 Russia defeated Brazil in five sets in Athens on Thursday to cruise into the final of the women's volleyball in the Athens Olympics.

Led by Gamova, Russia took an early lead with 5-2, but the Brazlians soon geared up to build momentum with a 7-3 run to reach the set-point 24-18 and made a successfully block to take the opener.

Gamova scored 10 points in the set and she found it was more difficult in the second set to take a spike.

Shashkova and Elena Plotnikova combined to score 11 points in the second set and helped Russia to a 21-17 lead.

But it was Brazilians who won the set, they launched an incredibly 8-0 run to finish the set 25-21, Marianne Steinbrecher contributed three of them. She had 14 points and four blocks in the set.

Gamova's last two tries to retrieve the losing trend for Russia were both blocked by the Brazilians, she only had four points in the set.

Trailing 0-2, the Russians found themselves in a do-or-die situation. After even 21-21, the Russians battle off four of the next five points to take a set back with 25-22.

The Brazilians fought off a set-point but could not stop Shashkova from her powerful spiking in the next.

The loss could not deflate the Brazilians. In the more tense fourth set, Brazil pulled out to 19-18 lead.

The tough defending played a key role, Brazil scored five points in a row to make it 24-18, including three blocking points,but could not close it out.

Russia beat off four set-points to level the score 24-24 and continued their winning trend to a 26-25 lead.

The Russians didn't let the win slip away, after wasted two set-points, they evened the match 2-2 with a 28-26 fourth set.

As the marathon continued in the fifth set, Brazil took a 6-3 lead and maintained it 10-7 and then 12-9 before Russia's head coach Nikolay Karpol called a time-out.