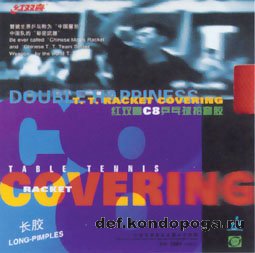 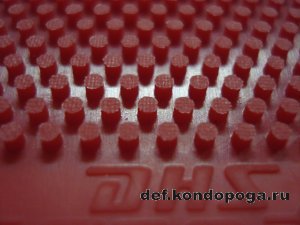 DHS:
”C-8 Long-pimples rubber has been referred to as the "Chinese Magic Racket" or Chinese Table Tennis Team Secret Weapon" by the Table tennis world. It makes a breathtaking effect due to it's irregular swing of super-long pimples.”

I've tried a red OX sheet on a YLT Cameo Combination blade, on the DEF side (yeah- Cameo Combination blade has a DEF side and an ALL side!). C8's pips are broad and long, and the base top sheet is very thin. I used a glue sheet to attach it to my blade, which could make it play a bit less unpredictable, a bit slow, and more controllable (kinda ultra-thin sponge. I mention this because it's base top sheet is so thin that appliying the glue sheet could be a significant change in comparison to gluing the rubber).

1 - I fount it a bit slow (thus very controllable) and not spinny at all (but not as dead as Dr. Neubauer Super Special, I guess that it would be slightly spiny with a soft sponge): This results in a controlable rubber for close to table play.

2 - About spin reversal: Decent amount of spin is returned when blocking. To return more spin, you have to continue the incoming spin with your stroke (chop-blocking instead of blocking, it you are dealing with a topspin ball). It's not deceptive, and quite predictable: When chopping, your opponent is likely to control-loop the rally, since you can put little variation with the OX version (Sponge version should allow much more variation). But in a close to table game things get much more tighter, and you can outlast a looper with well placed blocks.

3 - As I've said, it's good for close to table play: Very effective blocks and chop-blocks. It's easy to hit against backspin. When pushing against spin it produces a remarcable wobbling effect. You can play a high pace & extreme placement with it, but also a safe push/block game. You can hit once in a while, but you have to select with some care wich balls to attack (it's easy to attack against backspin, but difficult to attack against topspin). With sponge it probably suits a good block & hit game.

4 - When you play far from table, the rubber has enough control to return the ball safely, but it's unlikely to put opponents in trouble because of heavy spin (decent backspin is archieved, but it's nothing spectacular). It can annoy some opponents if you manage to fish (it's very difficult), no-spin chop or push the ball back to the table because the ball wobbles notoriously. I think its chops lack a bit of spin for a truly chopping rubber, but it can be used with this purpose that.

5 - Service return is very easy with it, since you feel very little spin (But you feel some spin: It's no way close to Dr. Neubauer Super Special). Letting the ball come to you, waiting for it to drop a little and pushing it back allows you to return most serves without problems, but some good receptions can be done when pushing serves off the bounce.

6 - I'd say that this rubber is very good for players that give initiative to the opponent on purpose, and feel comfortable in a close to the table blocking game, or mixed style players with inverted or short pimples on FH, that use his BH to set up his forehand.

7 - The rubber I purchased was pretty cheap, and came unevenly trimmed (it wasn't a perfect square as other rubbers are) in a very cheap envelope (just a thin non-sealed bag). This makes me suspect that this rubber can be inconsistent.

Double Happiness C-8 is a highly deceptive chopping rubber that can also produce some attacking shots. Returns can produce decent spin reversal and can be highly unpredictable! It is regarded as a rubber with HIGHLY 'disturbing' properties.

Review by Alex ( ttp://aussietabletennis.blogspot.com):
I testing the C8 red 1.0mm on my Stiga Energy wood today. My main comparison is to my favourite Galaxy 955 0.6mm, on the same same blade.

In general this rubber has very good control, despite the fact that it had a 1.0mm sponge.

Return of serve:
Control was good, was a little sensitive to incoming spin, but not bad at all. The spin reversal is not great on this, it produces more of a dead ball, but the control allowed good placement, and the grip allowed me to keep it real low. Against topspin a quick block was quite easy to and with good control. Against backspin, attacking was harder, it felt a little too fast, probably due to the stiffer pip and harder sponge.

Generate spin:
I did not feel I could generate a lot of spin with this rubber, the pimples are a little stiff and the sponge quite firm, so I don't think it's the best for this. Still as a fake this is not so bad. There WAS enough grip to keep no-spin balls low though, so it's still a fairly grippy pip.

Blocking against loops:
This is where this rubber really shines... the control was fantastic, better than any I've tried so far. It had a bit of a dead feel on passive blocks, so I had little trouble keeping my blocks on the table. Hitting the ball more aggressively worked very well too. The bat must be closed a little, and a forward movement is required, and this could produce fairly fast balls with decent sink...very effective.

Chopping against loops:
This rubber offered good control for this as well, but not as good as the 955. I feel the 1.0mm sponge certainly contributed to this, a 0.6mm would almost certainly improve this control. Spin reversal was very good, and I could certainly very the spin quite well, but I had more trouble keeping the ball on the table.

With the 1.0mm sponge I feel this rubber is great for blockers, and offers good attacking abilities. It has good control in most aspects of the game, and enough control for some effective chopping, but it excels close to the table. The sponge probably contributes as much to this as the pimples do.

C8 plays like a cross between Friendship 755 and Stiga Destroyer, and is very effective close to the table. Counter-hits, so long as you are in position and hit through the ball, are consistent and give decent spin reversal. Blocks against topspin can be done by using a strong forwards movement, although chop-blocks seem to work better: they are more consistent, stay low, and give good spin reversal while slowing the ball down. Hitting against backspin, especially against heavy backspin, is consistent and reasonably fast. As with 755, it is better to use a 'normal' style for hitting against backspin, rather than the 'scooping' style that is necessary for other long pimples (a 'normal' style, for backhand shots, uses the wrist and forearm in roughly equal amounts, whereas the 'scooping' style comes almost entirely from the forearm and involves opening the face of the bat while keeping a straight wrist throughout the shot). Pushes with C8 can be kept low, and produce enough variation to make the opponent hesitate. Chops with C8 give good to very good spin reversal – enough to trouble a good looper. However, because C8 is a relatively fast long pimpled rubber, it is really only good for fast chopping. It is difficult to slow the ball down, and it is difficult to control the rally when chopping (since everything happens too fast!). The speed also means chops tend to go long. Despite this, C8 would be effective for occasional or even frequent chops, so long as this is not the focus of one's game. Overall then, C8 is not especially good as a chopping rubber; and most close-to-the-table players would probably prefer Friendship 755 or 837 (since these are slightly better for hitting and normal blocking). But for those close-to-the-table players who like to hit and chop-block, C8 is probably the better choice.